Day Trip to Treviso: what to see

Do you remember our article about what to see in Venice in one day? In today’s article we would like to suggest you a handy guide to a day trip in Treviso, one of the most loved cities in Veneto. Treviso, with its wonderful squares, alleys and romantic canals is located only 40 km far from Jesolo Lido, which makes it a perfect destination for a day trip.

Located in the very heart of the city, this square cannot but belong to your must-sees in Treviso. Piazza dei Signori is surrounded by several buildings: first and foremost the Palazzo dei Trecento, the former seat of the municipal assemblies which consisted of three hundred (trecento) members. You will then see Palazzo Pretorio, the Municipal Library and Art Gallery and
Palazzo della Podestà, with its almost fifty-meters-high tower. 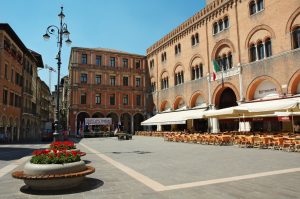 Just a couple of minutes away from Piazza dei Signori you will come across the Loggia dei Cavalieri (literally, Loggia of the Knights): a porch dating back to the second half of the XIII century. Symbol of the political power of the nobility of that time, over the years, this porch has been used for many different purposes. Initially, it was a meeting point for nobles, a place for discussions and games. Later it became also as a warehouse.

Treviso stays also for suggestive light and water games. Watercourses have always covered a key role. Evidence of this is the area that crosses the Sile river, which can be reached through the porch between the Prefecture and Palazzo dei Trecento. In this area you will find the Pescheria, a small island where the traditional fish market takes place. The mills in the background make this spot even more charming.
Not to be missed is the nearby Ponte della Malvasia, a bridge with a beautiful view over the Buranelli Canal. 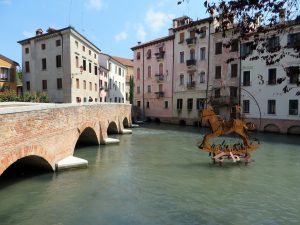 This alley is to be mentioned not because of specific monuments or buildings, but because of its unique atmosphere: a charm that makes it one of the most characteristic streets in Treviso. Definitely a must-see!

The facade of the Duomo, the Cathedral of Treviso, named after St. Peter the Apostle, won’t be hard to find. While it was built in fully neoclassical style, inside the church you will instead find a mixture of styles: from the Romanesque to the Neoclassical, from the Renaissance to the neo-Renaissance. Don’t forget to take a look at the Altarpiece of the Annunciation, a masterpiece by Tiziano.

The Church of San Nicolò is the biggest church in Treviso and it’s one of the few original buildings in the area. Many others were indeed destroyed during the bombing of 1944. The style of the church is a mix of Romanesque and Gothic and was the seat of the order of Dominicans. 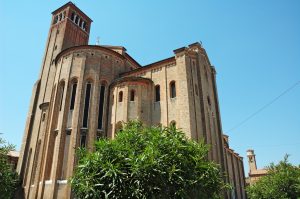 The Church of S.Nicolò, the biggest church in Treviso.

Calmaggiore is for sure what can be labelled as the shopping street of Treviso. It is a must-go during the weekend, especially if you’re looking for something cool to buy.

In one of the galleries of shops on the sides of Calmaggiore you will find another icon of Treviso: the Fontana delle Tette (literally, The Fountain of Tits). Under the domination of the Republic of Venice, this fountain used to spill white and red wine for special celebrations. Today, we only have a copy of the authentic one, which has been seriously damaged and is preserved under a shrine under the porch of Palazzo dei Trecento.

We have already pointed out how water defines Treviso’s unique identity. Water is indeed also the protagonist of the Buranelli area, one of the most suggestive and romantic areas of the city, where, between porches and lights, it will be hard not to take out your camera.

Saint Thomas Gate and the Walls

The Saint Thomas Gate (Porta di San Tomaso), built in Istrian stone, is the best preserved gate among the three ones, still visible in Treviso. The facade is meticulously decorated with crests, trophies and the well-known lion of St. Mark (few, however, know that it is a reproduction of 1857).

From the gate you will immediately notice the city walls, built in 1509 to protect Treviso from Venice. Note that the walls are viable: a great chance to have a nice walk and to admire Treviso from above.

Good to know: especially if you’re visiting Treviso with children (but not only), remember that in this area, right under the walls, you will find the Penisola del Paradiso, a green area populated by geese, rabbits and other animals.