Summer 2019 in Jesolo: the events you cannot miss

From May 20th to September 30th 2019 Jesolo’s main squares are hosting the “Jesolo Arte” exhibition.

The Drago, Carducci, Casabianca, Milan, Turin and I ° Maggio squares will thus become real open-air museums making your usual walks not just a chance to chill, but also a great opportunity to get to know more about contemporary art.

The popular International Sand Sculpture Festival is back for the 22nd edition. This year is dedicated to Leonardo da Vinci and is open until September 15th in Brescia Square.

Festival of the Patron Saint

The event is held from June 26th to 29th and consists of a series of high-profile jazz concerts, designed not only for fans of this genre, but also for a wider audience. Many famous songs will be arranged and revisited in a jazz key. The festival takes place every day in a different square: Marconi, Milano, Aurora and Torino.

From June 24th to 28th New Jesolandia (which we mentioned in Family fun in the most exciting parks of Jesolo) is hosting Circo Vegano (Vegan Circus), a contemporary circus without animals. The shows begin at 9pm and the admission ticket is of 5 Euros.

The non-competitive RunSunrise running event is taking place on Sunday July 7th 2019, starting from Piazzetta Faro at 5.30am.
Arrival is expected to be at the Marconi beach consortium, where a re-energizing tasty breakfast will be offered to the runners. The race is open to everyone and does not require any membership.

On Saturday 20th July the X edition of the Interregional Festival of Bands and Majorettes will be held. The event will be opened by a parade in the pedestrian zone, from Piazza Marina to Piazza Aurora. Here the show will take place in the amphitheatre, with music and choreography.

Thursday August 1st, in Piazza Torino, one of the most awaited events of the summer 2019 in Jesolo will be back: the Festival Show, organized by Birikina radio and Bella & Monella radio.

What to expect? Music, dance and entertainment come together in a unique event to give participants memorable moments.

On Saturday 10th August “Holi – the festival of colours” will be held in Jesolo at Faro beach. Once again, Jesolo will see its most colorful day of the year, accompanied by the tunes of many famous DJs. 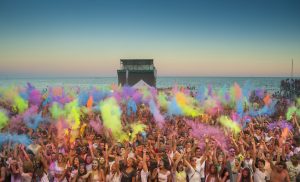 The city of Jesolo celebrates Ferragosto 2019 (August 15th, Italian bank holiday) with an impressive firework show over the sea, the key-event of the summer. Definitely a show not to be missed at the beach of Piazza Brescia.

During the traditional Feste Marinare (Fish Festival) 2019, organized by the Polisportiva of Cortellazzo, fish is obviously the main protagonist. They will be held at the Sports Center and you can taste typical wine and local cuisine. They’re planned to start at 6:30pm.
Here’s the plan:

This year once again, the theatre group “Teatro dei Pazzi” invites you to enjoy your summer evenings with its Summer Carnival 2019 shows. The shows start at 9:15 pm and the entry is free.
Calendar:

Saturday 13th July 2019, in Piazza Aurora, the Fluo Run Festival will be held. From 3pm to 11.30pm fitness and sports will be the absolute protagonists, together with other activities such as Zumba and Pilates. Once the activities will be over, the Fluo Run, a 5km fixed route, will begin. Expect a real “fun race”: runners will light up the streets by wearing bright and fluorescent colors.

In the summer 2019 a unique stage welcomes the shows of the Theatre on the Beach and the Theatre of the Sea at the Jesolo beach Arena in Via Orseolo.
Surrounded by an amazing setting of sand, sea and night sky, theatre and sea meet each other to become the frame of unforgettable memories.

Also this year Jesolo celebrates the harvest with two events: on 7th and 8th September the streets of Jesolo will be the backdrop to the great celebration with allegorical carts and tastings of local wines and grapes.

On September 15th Jesolo Air Show will be back! An event everyone is waiting for, the Jesolo Air Show – with its colors, sounds and aerial acrobatics – amazes every year tourists and citizens, adults and children. The show can be seen from any spot of the coast of Jesolo, but… Follow our advice: the beach on Piazza Brescia has the best view. 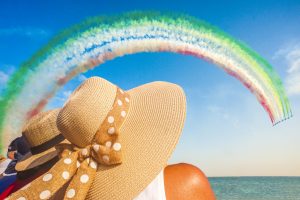 Sports lovers have found their perfect destination in Jesolo

Sports In Jesolo
Located on the sandy shores of Jesolo, Park Hotel Brasilia offers a wide range of sports and outdoor activities to …
More info
What to see in Venice in one day
Visiting Venice in one day is almost a mission impossible. This city, so special and unique, deserves way more time …
More info
Prev Next
Contact us Request a quotation Live the perfect journey Customize your stay Call us now +39 0421.380851