Elegance and history at the T Fondaco dei Tedeschi

The Fondaco dei Tedeschi – or Fontego dei Tedeschi, as Venetians call it – is an ancient building next to the Rialto Bridge that was founded in the XIII century. After its recent reopening, in 2016, it immediately jumped to position 1 of the most loved luxury department stores in town. Today, it is an unquestionable must-visit for shopping in Venice.

Every day, the T Fondaco dei Tedeschi opens its doors both to Venetians and to tourists from all over the world, enabling them to have a terrific shopping experience, offering the best of Italian and international fashion, jewelry, cosmetics and gastronomy. Repeatedly re-built and re-adapted over the centuries, this building has had a more than hectic past.

Origins and history of the Fondaco Dei Tedeschi

Initially, the building was used by foreign merchants to store the goods they traded by sea. It owes its name “dei Tedeschi” (of the Germans) to the Nordic origins – not just German to be precise – of the merchants who used to visit it to do their business.

Today, it is still possible to find lots of mercantile symbols and inscriptions engraved by German merchants on the marble balconies at the first floor.
Its historical relevance cannot just be ignored. The T Fondaco dei Tedeschi is indeed believed to be the only still existing example of Renaissance corporate symbols in the world .

In 1505 the building was destroyed by a devastating fire but, in less than five months, the Venetian Senate proceeded with the reconstruction of the entire building. It took three years to complete the reconstruction, which ended in 1508.

Under Napoleon, The Fondaco dei Tedeschi became a custom and later, in the 1930s, the headquarters of the Italian Post Office. 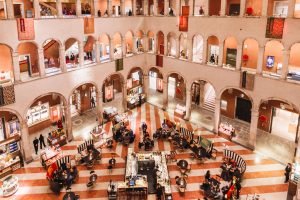 In 2009, its new owners decided to start a long renovation which ended only on October 1st, 2016. On this day the Fondaco finally reopened its doors as a luxury department store.
According to the archistar Rem Koolhaas, the building should now “re-establish the traditional Venetian connection between culture and trade, not only attracting demanding tourists, but also giving the Venetians a chance to enjoy what their city is famous for.”.

Valentino, Salvatore Ferragamo, Michael Kors and Bottega Veneta are just some of the brands that the T Fondaco dei Tedeschi offers to its many customers. Three whole floors of elegance and flair in a unique atmosphere. A perfect combination between Renaissance architectural charm and sleek modern design.

If you are wondering where to go shopping in Venice, this is a not-to-be-missed stop!

The rooftop terrace at the Fondaco Dei Tedeschi

Panoramic views of Venice are a rare pearl. That’s why once you find a nice spot over buildings and canals, you should consider yourself lucky!

No matter if you are visiting the T Fondaco dei Tedeschi for a wild shopping session, for its historical value or simply out of curiosity, for sure you cannot miss the panoramic view from its rooftop terrace.

With its 360° view over Venice and the Canal Grande, it is considered the best panoramic spot in town! The visit to the rooftop is free. Just keep in mind that, as it’s usually quite busy, you’d better book your visit in advance. Otherwise, feel free to contact us for more information. 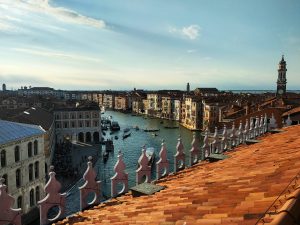 Discover how to easily reach Venice from Lido di Jesolo

How To Reach Venice
Make the most of our hotel’s privileged position, Venice’s timeless splendor is within easy reach. Take the ATVO N. 5 bus …
More info
Outlet Noventa di Piave
Featuring more than 150 boutiques in a beautiful setting with mosaicos and frescos, inspired by the palaces of Venice and …
More info
Prev Next
Contact us Request a quotation Live the perfect journey Customize your stay Call us now +39 0421.380851